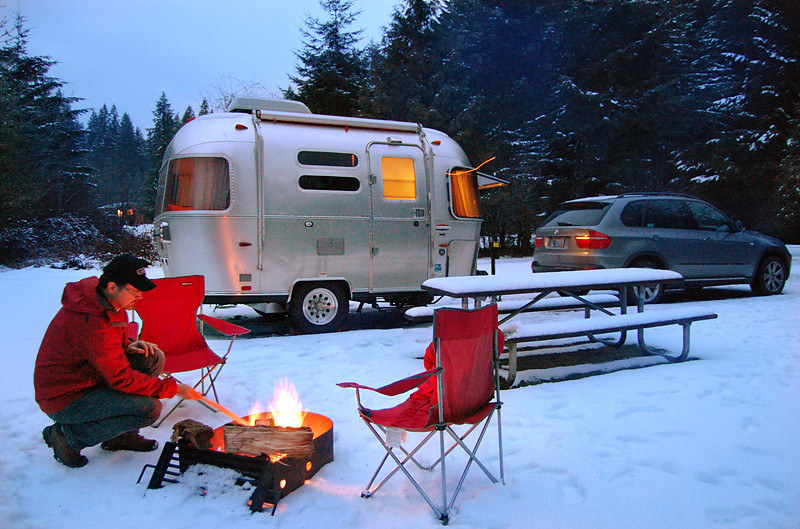 This has been an incredibly mild winter in the northwest. We’ve had our share of decent weather and rain-free weekends this year which has allowed us to get out and use the Bambi far more often than we had thought we would. The weather this week had been especially nice and signs of spring were everywhere. I’d even bought some tulips the night before at the grocery store to brighten my kitchen not expecting at that time that we’d be spending our weekend in the snow!

We had been hoping to see a little snow before winter’s end, but we hadn’t wanted to brave the mountain passes, so when we heard that a light dusting was in the forecast at Silver Falls, we decided to pack up and head out. Todd had a full day’s work to do on the computer but we decided he could work there just as easily as he could at home.

We arrived at the park in the early afternoon to a few inches of snow already on the ground. Todd worked at the dinette while I read a book I’ve been working on since this summer. It was a wonderful way to spend a Saturday afternoon. There’s just something really special about sitting in a cozy space watching the snow fall slowly. I especially love the hush and quiet after a fresh snowfall. It’s probably an Oregonian “thing” because snow is a pretty rare event to those of us who live in the valley. Any change from gray skies and rain during the winter months is a cause for celebration in my opinion. 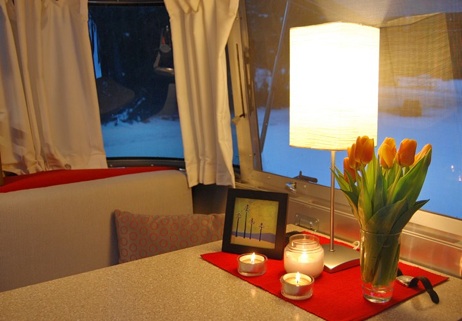 All set up for an afternoon of work. 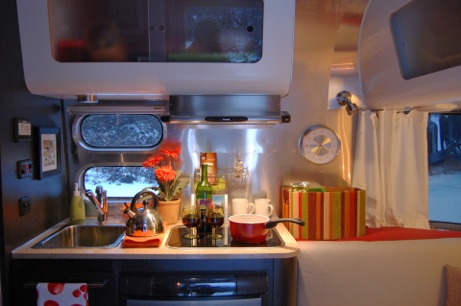 Dinner of soup and hot bread.

Early in the evening, the snow stopped for a few hours allowing us to build a nice fire for the night. There was no wind, so sitting outside next to the fire was surprisingly comfortable. It was a great way to end the day.

A fire in the snow is something special!